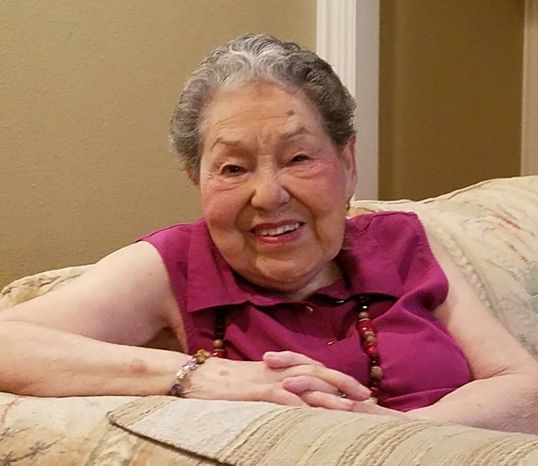 Lydia Noemi Rodriguez Frias (d. January 25, 2019), a resident of Fort Worth, Texas was born September 7, 1925 in San Benito to Julio and Nieves (Pedraza) Rodriguez. The eldest of four children, Lydia learned Spanish first then English. Her grandparents were converted by Presbyterian missionaries and she attended Iglesia Presbiteriana Getsemani in San Benito. At a young age, Lydia dedicated her life to God and to serving Him. It was a commitment she didn’t take lightly. She was a woman of strong faith and an active, lifelong Presbyterian.

Lydia graduated from San Benito High School in 1945, attended Austin College in Sherman where she majored in Bible and graduated in 1950. She then attended the Presbyterian School of Christian Education in Richmond, VA. To earn money, Lydia screened movies for female inmates in both Texas and Virginia prisons. Later, back in Texas, she was employed by Central Presbytery Office and worked with children in Hispanic Presbyterian churches in Dallas. Living with the Diaz family, Mr. Diaz taught her how to drive in a Crosley car, and in 1947, she met her future husband, Juan Samuel (Sam) Frias at Gethsemane Presbyterian church in Fort Worth. When other guys would call to speak to Lydia, Mr. Diaz only gave her the messages from Sam.

Sam went to Texas A&M University and Lydia went to Austin College, and both graduated in 1950. After a 10-year courtship, they married at Gethsemane in 1957. They made their home in Fort Worth, and she volunteered at John Peter Smith Hospital from 1957-1959 as a candy-striper writing letters in Spanish for patients. She then worked for 41 years for the Daycare Association of Fort Worth.

Lydia wanted to be a minister at a time when women were not encouraged to do so. Her dream was to be a missionary to Mexico. She was blessed to have an understanding boss in daycare, and for many, many years, Lydia served the Presbyterian church (the local church, Grace Presbytery, the Synod of the Sun, and the General Assembly) as one of the first Hispanic female elders working on many committees, traveling the world, and representing the Presbyterian Church at all levels. She was active on the Hispanic American Ministries Council, focused on social justice issues and championed the rights of children.  One of her more notable contributions was serving on a committee to unite the Northern and Southern Presbyterian Churches ending a 122-year split that began during the Civil War. This was successfully completed in 1983. She also supported the church in several ways especially when Gethsemane didn’t have a minister. She kept the church going. While never having the official title, Lydia ministered to many people by comforting, educating, pastoring, and assisting people in times of need.

Travel was a part of who Lydia was. Whether traveling for the church to Central and South America, or the Caribbean, she was also a part of Billy Graham’s crusades to Korea where they thought she was a local.  Lydia loved Mexico and for 20 consecutive summers, she and Sam volunteered with T.I.M.E. For Christ Ministries, a medical missionary organization based in San Antonio. Being fully bilingual, they went to remote, mountainous areas of Mexico where there was no healthcare. She served as an interpreter between medical personnel and native Indian people of the region. She was also active with Church Women United, serving as Treasurer. It was through this organization she was able to go to Cuba and Jamaica attending the Third Conference on World Hunger.

Lydia was a natural nurturer. Over the years, she cared for her mother, father, brother, sister, aunt and mother-in-law. She never had children, yet had a hand raising many children; in particular Steven Lee, J.D. and Sam Lee, D.O.  Lydia was the type of person to selflessly help others first and ask questions later. Her faith drove her to do the right things, often at her own expense and inconvenience. She once saw a woman pushing a baby carriage down the street with two children and said, “do you want a job?” The woman said yes and is still working for daycare to this day.

She had a huge impact at Gethsemane Presbyterian Church, Fort Worth, where she oversaw Christian Education, taught Sunday School, led bilingual Women’s Bible studies, coordinated Vacation Bible School and led trips to Mo-Ranch for the Hispanic Women’s Conferences. For many years, the church had an International Academy. Lydia taught English as a second language and U.S. citizenship classes to many people. Often when she was around Fort Worth, her past students would be so happy to see their professora.

In later years, Lydia was on the board of Northside Community Health Clinic, participated in Toastmasters and was a translator during elections for Tarrant County. She never stopped learning and enjoyed reading the newspaper and preferred to watch Ted Koppel and Bill Mahr for her source of news. Her nephew Doug often referred to her as “a hip old lady” because she was so well informed about current events. She loved visiting people, spending time with family and had a huge heart for those underprivileged, for children, the elderly and animals. While she never danced, she’d sing away to Mariachi music and was especially proud of her cousin in Mexico, Felipe Valdez Leal, the composer and record producer who wrote the famous song, “Tu, Solo Tu.”

Lydia was preceded in death by her parents, brothers Efraim and Joel Rodriguez, sister, Elizabeth (Betty) Moreno and dear friend, Barbara Lee. She is survived by her husband Sam, sons Steve (Lori) Lee of Austin, Dr. Sam (Jennifer) Lee and their daughter, Abigail of Fort Worth, numerous nieces, nephews, cousins and their families. The family would like to thank the staff of Dr. Sam Lee, Universal Home Health and Universal Hospice for their kind care. If you wish, in lieu of flowers, please make a tribute donation to Gethsemane Presbyterian Church or the Alzheimers Association at alz.org.